Putting: The game in the game

Putting has so many peculiarities and unique aspects that it is often seen as an independent “game in the game”. It is only in recent years that this aspect of the game of golf has been scientifically studied in more detail. Measurements sometimes brought surprising results to light, which we take into account when building our EasyPutter.

and therefore the most important club is the putter. About half of our golf swings are made with the putter.
A 10cm putt is just as important as a 230 meter drive – if it doesn’t work, it costs one point.

No other stroke in golf can be improved as easily, quickly and permanently as putting – regardless of age, constitution, condition and handicap.

Why is putting so difficult for many golfers?

Measurements on many hundreds of golfers have shown that over half of the golfers already MISS the hole from a distance of 2.5 meters. The unusual position of bending over the putter to aim at a target is not only difficult, but for many golfers it is physiologically impossible to do so precisely. (Deepening: parallax error, corneal curvature). Remedy: Aim as with a rifle, eyes in line with “notch”, “bead sight” and aim – namely BEHIND the putter.

The clubface has the greatest influence on the correct direction.
If it is not 90 degrees (square) to the aiming direction at the moment of impact, the ball rolls in a different direction.
If the swing path on which the club head moves at impact is not identical to the aiming direction, the ball will not roll in the desired direction, but the effect is significantly less in percentage terms than with a twisted clubface.

Putter head square at the moment of impact is much more important than the absolutely correct swing path!

A deviation from the ideal swing path has an effect of approx. 20% deviation.

If the club head hits the ball on a 10% trajectory to the target line with a squared clubface, the deviation is only about 2 degrees.
Deviations are a factor of almost 1 to 4, so it is much more important to concentrate on a square clubface than on the swing path.

Due to the different characteristics of the green (hardness, dryness, grass type and cut length), balls can roll very differently for the same swing. These conditions can change from course to course and even on a course from day to day.

The identical swing can make the ball roll from

Reading breaks is important – and unfortunately not very easy. But you can make it easier for yourself by using modern methods, e.g. also the AimPoint green reading.

Analyze green already when approaching: What is the environment of the green? If the entire area around the green has a slope – then it is very likely that the green as a whole is also inclined in the same direction.

AimPoint Express: based on the inclination of the green, which can be felt with the feet according to the instructions (advantage: no optical illusions), you can easily and quickly determine the aiming point for the putt.
Link: Aimpoint Rolf Kinkel 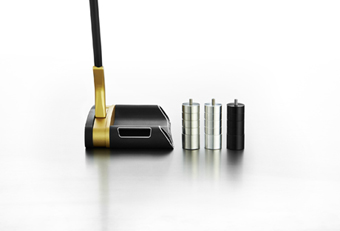 Version “same force”: here the player always moves the putter with the same amount of power – thus a short putt lasts significantly less time than a long putt – the speed of the putter head is only slightly higher on a long putt.

Version “same time”: with this putting technique exactly the same amount of time is spent on EVERY putt. In other words, a short putt is moved very slowly, a long putt must of course be accelerated much faster in the same time unit.

As a rule of thumb:
Backswing lasts as long as the complete follow through:
from middle length: 1/3 backswing, 2/3 follow through.

This method has three advantages:

More weight on faster greens – or on slower ones? Or is both correct???

Surprisingly, both are correct here – it depends on the particular type of putting.

For this type of putting, the following applies: slow greens = more weight (because this additional weight cannot be accelerated as quickly with the same amount of force)

For this type of putting, applies:

Myth: straight or circular? – the truth: the natural swing path is an ellipse segment

Golfers often argue whether the ideal technique for putting is a circular segment (open-square-open) or straight (square-square).

Here we are dealing with a major misunderstanding that could only arise because a three-dimensional movement was reduced to two dimensions:

Let’s  imagine a golfer in his address position when putting.
Let’s  now think of the plane of rotation (spine at shoulder level) and perform a complete circle in this movement. (Please only in thought). Depending on how the golfer stands, this will result in a more or less inclined circle, the steeper he stands, the flatter this circle will become.

Let’s change the perspective: look at the circle from above. If we project the circle onto the ground level, we get an ellipse: the steeper the golfer stands, the greater the angle of the circle that his putter head passes through when putting. The golfer, whose spine is in extreme cases horizontally aligned, has hardly any angular change of his putter head. As a result, the chance that his putter head is really square at the moment of impact is of course significantly higher.

Due to the regulations for permissible putters (especially the prescribed lie of less than 80 degrees) and the physiognomy of the person, putting in one line (on the ground) is not possible – not even with a pendulum movement. The normal putting movement, i.e. without any attempt to deliberately manipulate the club into a straight movement, will take place on a straight PLANE – this is felt to be a straight swing – but on a swing PLANE and not on a straight LINE. The putter head moves on a circular segment. Attempts to move it on a “straight line” require a permanent readjustment of the entire movement. This overtaxes the perception, processing and correction instructions in the brain and the permanent muscular readjustment – permanent attempts with this technique often produce the feared yips.

Conclusion:
The more horizontally the swing axis (spine at shoulder level) is held during putting, the higher the probability that the putter head is square to the ball at the moment of impact. (This is the most important aspect with the biggest effect on the rolling direction – see above).

Myth: Feeling of a putter

Our tip:
Don’t be distracted by your ears, use objective data to decide which putter gives you the best results instead of falling for acoustic illusions. Give importance to aiming accuracy (keyword stability) and repeatability of the energy transfer – and this depends on the quality of the clubface. EasyPutter has therefore decided to use metal club faces instead of soft “plastic inserts”.

Myth: All putters are good enough

At first glance, this may seem to be the case to a layman – after all, it is “only” about getting a little ball rolling. Due to the importance (a putt over centimeters is just as important as a 250 meter drive) and the complexity of the repeatable, fine-tuned putt movement, a really well-fitting putter must be used for the best results. Even the pros on the PGA Tour practice putting for hours every week – if you don’t have that much time to practice, the right hardware is even more important.

The fact is:
Most experts are unanimous in their opinion that

Copyright Easy Putter 2023 - All Rights Reserved
Back To Top